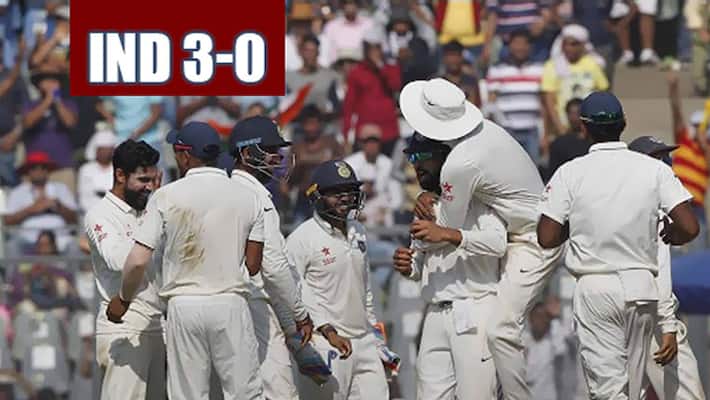 India needed four wickets for a victory, and they took just a little over half an hour to wrap up the final day to go up 3-0 in the ongoing five-Test series against England.

England, who won the previous three Test series against India, never came back after Keaton Jennings' hundred and Jos Butler's fighting knock of 76 in the first innings.

With this win, India sealed the five-Test series 3-0, and a proud Kohli and Co were seen taking a victory lap in Wankhede - the stadium that finally resumed Test cricket after it bid a tearful goodbye to Sachin Tendulkar in 2013.

Here is a look at records made and broken in the Mumbai Test:

The Indian team has played 11 Test so far at home under the leadership of Kohli, and they are yet to lose a game.

Under Kohli's full-time captaincy, India have played 21 Tests. After a draw and loss in a Test against Australia and Sri Lanka in 2015, India have been unbeaten in 19 Tests now.

It was India's fifth consecutive series win and they have equalled their best streak in Test cricket. They had also won five Test series in a row between 2008 and 2010.

The Mumbai win was India’s eighth Test win under Kohli in 2016 - the most number of Test wins by any Indian captain in a calendar year. Earlier, MS Dhoni had won seven Tests in 2010.

Ashwin, meanwhile, bagged his career's 24th five-wicket haul and seventh 10-for in Tests. In the last two years, Ashwin has notched up a total of 15 five-wicket hauls - 7 in 2015 and 8 in 2016 - the most by any bowler in two consecutive years.

Here is a list of most number of 5-fors since Ashwin's Test debut:

Kohli's individual score of 235 took him past Dhoni for the highest score by an Indian Test captain. Dhoni had scored 224 against Australia in 2013.