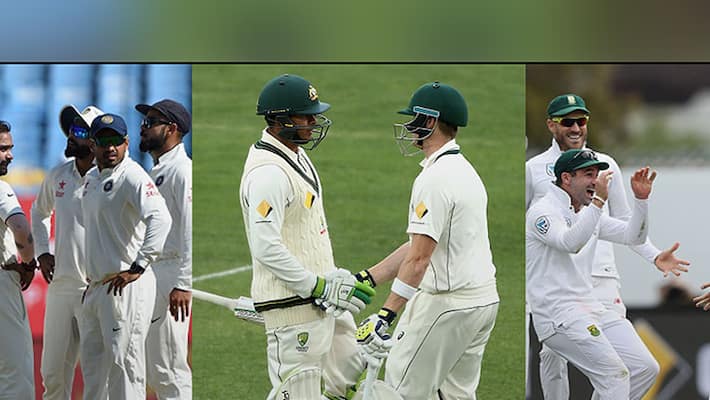 With one Test remaining in the three-Test series, Australia have faced a second consecutive home series loss against the Proteas.

Kyle Abbott was the Player of the Match in Hobart win. Source: Getty Images

The instance that will hurt Steven Smith and Co terribly is if they go on to end on the losing side even in the third Test. This will be a second whitewash the World No. 3 team will suffer in a span of a few months.

So far, Australia have been whitewashed only five times in the Tests, and all the losses have come away from home. Australians, who have dominated on the home soil for almost two centuries, a clean sweep in front of the home crowd will be no less than humiliation.

Australia have not been whitewashed twice in a row by the same team, away or at home. The Australians have been whitewashed so far only by five countries, and no team has achieved that twice.

The current misery in the Australian camp has taken the excitement, about the upcoming series where India host this opponent, to a different level. The last two times Australia toured India, they went back home after losing the series.

India and Australia played six matches in total in the previous two occasions when Australia toured the former. The results went India's way - 2-0 and 4-0 - denying Australia yet another series triumph on the Indian soil.

It's been 46 years since they beat India at the latter's backyard in a full-fledged Test series.

Keeping in mind the present form of South Africa - led by the youngsters, Kasigo Rabada, Temba Bavuma, Kyle Abbott and others - there are huge chances that they will deny India the history.

The Proteas must be proud of themselves. Without the services of their key players, AB de Villiers, Dale Steyn and Morne Morkel, they have come this far, negated the long enduring Australian dominance at home.

Faf du Plessis' side deserves every bit of success they have tasted so far on this tour. They now are just a win away from a beginning of a new chapter in South African cricket.

Australians have never been whitewashed at home so far. Source: Getty Images

It's a matter of pride for Smith and Co; they will give away everything to avoid an embarrassment at home. If they do it, it will be over to Virat Kohli-led India to give their country joy - a 4-0 win over Australia!