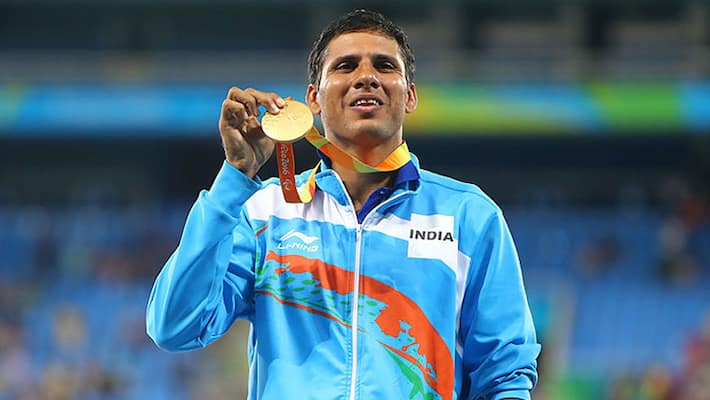 When Abhinav Bindra, who remains India's only Olympic gold medallist, created history in 2008, he was India's new sporting hero.

However, that was not the case.

Here are 13 facts you must know about the one-armed athlete, who has only bettered himself to bag a second gold medal at the Paralympics.

Birthplace and family: Devendra was born on June 10, 1981, in Churu District of Rajasthan to farmers Ram Singh and Jivani Singh. He has two siblings, both brothers. The para-athlete lives with his wife and two children, a son and a daughter, in Jaipur.

The tragedy: At the tender age of 8, Devendra accidently touched a live electric wire of 11,000 volts while climbing a tree. His left arm was completely burnt. The villagers who later arrived at the spot attracted by the smoke declared Devendra dead.

Life's Miracle: The villagers rushed the eight-year-old child to a nearby hospital. To everybody's relief, he regained consciousness. However, the doctors were forced to amputate the burnt left hand, leaving him devastated.

In a later interview, the 35-year-old had admitted that at the time, he was more worried about facing his friends as a cripple, than the actual injury.

The fear-turned-into-reality: The same friends who played with him in the past began to shun him. During play times, the group would fight against taking Devendra in their respective teams, calling him, "weak."

Perhaps it can be said that the attitude of those children later became one of the primary reasons behind Devendra's success in the field of Para-athletics. Their mocking pushed Devendra, who decided to prove he was not 'weak' by taking the bold decision to opt for sports seriously.

His first javelin stick: Devendra was from a family of small-time farmers. Initially, they could not afford to buy him a javelin stick. The determined child used a bamboo stick and practised the sport in the fields surrounding his village.

Educational qualifications and employment: Devendra, who has a Bachelors in Arts, is currently employed with the Indian Railways.

Sports Ministry ignores Devendra: In 2005, the Sports Ministry gave away cash rewards to athletes who won at international events. Sadly, Devendra, who was India's only 'Olympic' gold medal winner that year, was not recognised. He has never even received sufficient assistance from the Sports Ministry, whose ministers, however, do have the time and funds to travel the globe with their families.

There have been many instances when Devendra has written to the ministry for financial help. But most of the times, the letters went unnoticed.

World record: He set a world record of 62.15 metres in the 2004 Games. The Para athlete bettered himself on Tuesday with a throw of 63.97 metres at Rio, breaking his own record. Deal with daughter: Devendra's six-year-old daughter, Jiya, accompanied him for his training most of the times in Jaipur. He had a deal with her before the Paralympics at Rio. If she topped in her exams, he would go for gold in Rio, he revealed to PTI.

"She proudly phoned me to announce that 'I've topped, now it's your turn', something that kept on echoing in my ear when I entered the field at the Olympic Stadium," he added.

Go Sports Foundation: The GoSports Foundation is currently supporting Devendra through the Para Champions Programme. It is a non-profit and donor-funded venture that supports India's junior Olympics and Paralympics athletes.

National awards: He became the first Indian Paralympian to be honoured with the Padma Shri. He received it in 2012 and was awarded the Arjuna Award during the Republic Day in 2004.

No Ronaldo, Mane in Premier League's Player of the Season shortlist irks fans

Horoscope May 14 2022: Check out today's Astrological prediction For all zodiac signs