Kannur is a strange treacherous place 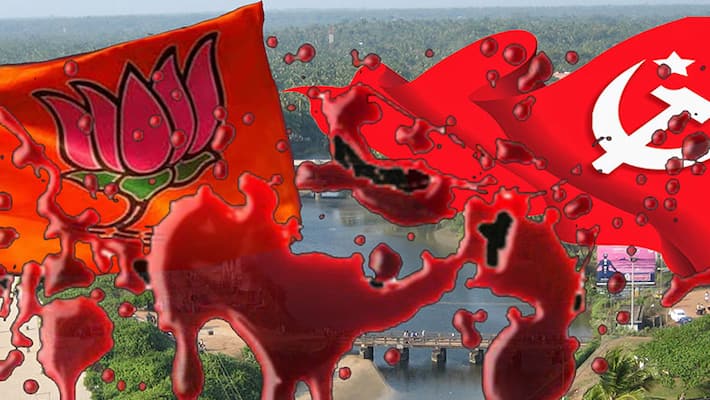 On July 12, Kerala woke up to the news of two brutal murders from Kannur, the northern district of Kerala where the Communist Party of India- Marxist (CPM) was born. One of the victims was a CPM activist from Payyannur and the other a BJP worker who earned a living riding an autorikshaw.

Sincerely, no one was shocked.

Both the men were hunted down by rival party cadres with crude weapons. The assailants prowled on their victim in the cover of the darkness, slashed the victims’ limbs, made sure that they stuck the daggers deep enough to crush the bones and hit the internal organs. The victims were left to bleed in front of or inside their house.

Come October, another flare up of mindless political vengeance snuffs out two more lives- a CPM cadre who was working in a toddy shop and a taxi driver with BJP affiliation. This time, the retaliatory killings took place in broad day light.

As usual, media started taking stock; seven deaths in political violence in a matter of four months!  For Kannur, violent political clashes are no news. The rabid hatred of the other and the bloodshed has a history of six decades.

No night goes without torching a house or bombing the office of the rival party. Less violent modes of vengeance take the course of setting vehicles ablaze, killing domestic animals and poisoning the wells. It is riot of a slow kind.

It takes a lot of courage to stick to nonviolence and democratic co-existence and to take the blame for what you do. Kannur leaders, of the CPM and the BJP, who dare not to go public without private guards and police protection, prefer to fan the fires of hatred and let the cadres do the killing.

CPM state secretary Kodiyeri Balakrishnan made an inflammatory speech just after the twin murder in July and urged party men to ‘repay’ without delay and not to let the rivals walk free after hitting CPM cadres. CPM district secretary P Jayarajan publicly stated that the party always made it a point to repay the loans with interest. In response, BJP state general secretary MT Ramesh also sounded the war cry and preached retaliation. RSS leadership justified violence in the name of self defence! "We will not stand our hands tied," the RSS state leaders stated.

The fresh bout of killings in Kannur in October was also followed by similar responses and blame game. Even though the murders this time happened in the home village of Chief Minister Pinarayi Vijayan, he did not bother to deplore the violence. Instead, he chose to blame the Union Government for abetting RSS violence! Incidentally, Vijayan handles the home portfolio as well.

A cannibalistic sense of hatred and a self-inflicted suspicion are carefully nurtured by the parties and leaders who train their cadres to kill, with or without provocation. Real culprits seldom get punished, as the parties have a system to provide the list of ‘accused’ to the police and in the course of time, almost all of them would walk free for want of evidence. The leaders, who conspire behind the curtain, never get booked. The investigators are also happy with the ritual.

Whenever a murder convict is released from jail, he gets a hero’s welcome by the party colleagues. But he knows very well that a dagger is getting ready for him in the secret dens of the rivals. There was an instance in which a teenager of a murder victim waited decades to avenge the death of his father.

This is a strange place, a dangerous terrain, in fact.

Kannur started to turn into a political killing field in the late 1960s. The political clashes turned into a literal bloodbaths in 1990s when the BJP and the CPM settled score just as in a football tournament. There were days when both sides lost three lives in a series of retaliatory attacks. Both sides lost many men, nearly 200 so far. The most barbarous of them took place in 1999 when Bharatiya Yuvamorcha leader KT Jayakrishnan was hacked to death inside a classroom when he was teaching sixth standard students.

But at some point, even at the height of the violence, the leaders were spared for some unknown reasons. The poor workers on both sides, however, continued to bleed to death in the streets, work places, in buses and inside their homes in front of their kith and kin.

Keeping a relative calm for quite some time, Kannur hit national headlines on 1 September 2014, when RSS leader E Manoj was murdered and the BJP making it a national issue. The incident kicked off a subdued riot in the district, considered ‘normal’ given the infamous history of political hostility. In just six months after that, the district recorded four political murders and clashes in which 183 persons were injured, hundreds of houses damaged, vehicles burnt and offices and reading rooms vandalised!

After the twin murders in July, the district again lapsed into political turmoil. No day went without raids at houses and party offices. No one batted for peace. Now, things have gone out of hand with two more men butchered in broad daylight.  Things are back to square one.

Lunar Eclipse 2022: Which Zodiac signs may benefit, where to watch and more