Jayalalithaa, Cho Ramaswamy - a friendship that lasted more than 50 years! 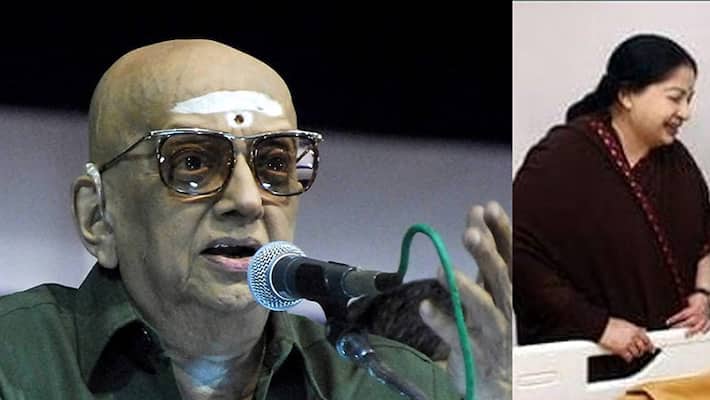 Senior journalist, actor, script writer, director, political analyst and the editor of Thuglak magazine made Cho Ramaswamy a multi-faceted man. But the most important equation he shared was with the deceased Tamil Nadu Chief Minister Jayalalithaa. Unfortunately, their association ended with their respective deaths at the same Apollo Hospital in Chennai in a span of two days.

Cho Ramaswamy’s association with Jayalalithaa transcended 50 years. He was apparently the only man who Jayalalithaa trusted throughout her political career. He was the man who has been a close advisor of Jayalalithaa.

When Ramaswamy was admitted in the hospital back in 2015, Jayalalithaa had visited him. She asked him to recover quickly because she needed her friend, philosopher and guide to advise her.

Ramaswamy, as he was popularly known for his fearless criticism, never backed Jayalalithaa as the CM of Tamil Nadu in 1996. Cho even warned the Atal Vihari Bajpayee-led BJP government at the centre not to forge an alliance with AIADMK. Ramaswamy’s predictions came true as Jayalalithaa withdrew her support and the central government toppled.

Later, with her good work she managed to impress Cho Ramaswamy and eventually their long-standing associations which began years ago during their theatre days flourished.

Jayalalithaa once wanted to leave Tamil Nadu. The police warned her as well. Then she chose to contact Cho Ramaswamy to guide her. Ramaswamy told her that it could have been a trick of the opposition to scare her. Thus Cho asked Jayalalithaa to stay back in Chennai and fight. However, she still left Chennai and only came back when Karunanidhi government toppled.