When the reel hero can't keep it real I did not want to write on l'affaire actor Suriya and his roadside 'heroics' especially when the matter is under police investigation. However, I do wish to talk about our collective attitudes towards people who happen to look dark, and apparently poor.

A luxury car crosses the Adyar Bridge in Chennai. There's a 21-year-old boy on a motorbike just behind the car. The car brakes suddenly. The bike crashes into the car. The woman driving the car gets into a heated argument with the biker. Traffic gets stalled.

There are plenty of fruit and flower shops by the roadside there. A few women selling flowers step in to diffuse the tension. Just then, Kollywood star Suriya, passing by, stops his car, gets down and thrashes the young man. The biker asks Suriya why he was raining blows on him when it was the woman driving the car who was at fault. Without any explanation, Suriya reportedly sped away.

Suriya may have thought that the young man was harassing a woman. Or, as Suriya claims, he may just have tried to mediate between the two jousting parties.

But that is the job of the police. Let's look at how social and police psychology works in such cases.

The young man in question is dark complexioned; he looks poor. Our social reflex is to turn violent when we encounter such people who we believe are in the wrong.

The young man bravely approaches the police. Even after waiting for a couple of hours, his complaint against Suriya is not accepted. It finally is, when lawyers associated with human rights groups turn up.

Even after that, it is only the boy and not Suriya who is repeatedly questioned by the police. 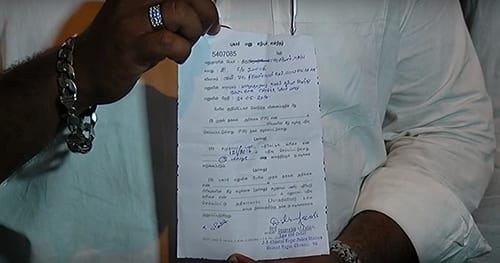 Intimidated, the boy says he fears the police would beat him death, or in the face of such humiliation, he'd commit suicide.

My question is simply this: If there is a traffic-related fracas (and it's all too common in our cities), is it more appropriate to try and calm down the warring parties and resolve the matter amicably rather than mix the reel and real and get into roadside fisticuffs to save a 'damsel in distress'?

That the dark man ought to be the villain is Kollywood logic. Going by that logic, the majority of people in India are worthy of a good pummelling.

That the dark man ought to be the villain is Kollywood logic. Going by that logic, the majority of people in India are worthy of a good pummelling.

If it's indeed true that actor Suriya had hit the young man, he must apologise and recompense him for the physical and mental inconvenience he has suffered. It needn't prick his ego, especially because he also tries hard to wear the hat of a philanthropist.

Some months ago, when the Chennai Metro was being inaugurated, DMK bigwig Stalin decided to take a train ride and mingle with the masses. He allegedly slapped a young man who tried to touch him. A video capturing the incident surfaced on social media platforms.

Read more by the author: If my Superstar's film flops, I'll jump into fire

Read more by the author: Jayalalithaa should thank Stalin more than voters

However, the youngster at the receiving end claimed that 'thalapathi' Stalin hadn't slapped him but merely patted him asking him to give way. The list of people Vijayakanth has manhandled is too long to be enumerated in this column.

Our celebrities and high-profile politicians are distinctly uncomfortable in the midst of hoi polloi. They prefer keeping a distance of a few feet from the common folk in public appearances. When they do choose to mix with us, violence often ensues. This is the kind of society we live in.