Did the Milan court take it out on her for continuing travails of Italian marines?

Now, this is unfair. Accusing Sonia Gandhi of receiving kickbacks from AgustaWestland when all of ₹360 crore was paid in bribes by the Anglo-Italian company is grossly unjust. Not a penny of those kickbacks came from Indian taxpayers. In fact, the Congress chief deserves commendation for recovering every paisa paid to AW. In all probability, we could be richer by three choppers as well which were already delivered when we cancelled the contract after those fools let it slip out  that bribes were paid to secure the order.

Therefore, the top brass, now cooling their heels in jail, fully deserves what it has got. Couldn’t they have ensured that not a word leaked about the kickbacks?  They may have reason to complain that the entire ₹360 crore went down the drain while the Indians ended up getting a good deal more over and above what it had actually paid by invoking the penalty clause.

How, then, does it matter to Amit Shah if Sonia Gandhi and her aides pocketed the bribes? So what? It isn’t taxpayers’ money. If the BJP is being needlessly aggressive in shouting `scam’ in the aborted chopper deal, the Congress is being needlessly defensive. Her foot soldiers should counter the BJP onslaught with a simple one-liner which, in the local colloquial language, would go like this: Tumahra kya hai? Sara paise to Italy ka tha, khaya to desh ka kya nuksaan hua? Tumey kya taklif hai? Na heeng lagi na fatkari par hamari jeb mein ₹360 crore aa gaye…. Or words to that effect.

Levity aside, it says something about the woeful lack of collective public conscience, and of course, the inability of the Indian media that the lid on this scam too was lifted by the Western media. As in the case of Bofors, which was first broken by Radio Sweden, despite a whopping  10% of the ₹360-crore AW order given in bribes, we remained completely in the dark until the Western media broke the story.

Ironically, it is Sonia Gandhi’s Italian connection that has yet again landed her in a huge public scandal. If at the heart of the Bofors scam it was her `family friend,’ the long-time Delhi-based Italian wheeler-dealer, Ottavio Quattrocchi, it is now the Milan court which has virtually incriminated her in the bribery scam.  She may protest her innocence but the world knows that corruption and Congress are inseparable. As in the case of Bofors, which successive Congress regimes contrived to finally give it a judicial burial, there was also an attempt to put a tight lid over the AW scam so long as the UPA was in power. 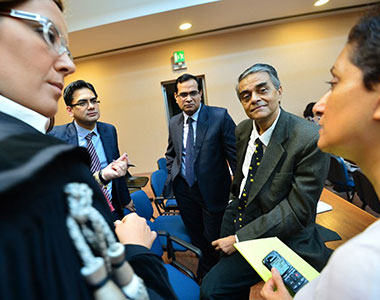 To say that they blacklisted AW is neither here nor there. In fact, Bofors taught us that blacklisting invariably proves counterproductive. The artillery gun was excellent but the army ran out of ammunition following the blacklisting of Bofors. Likewise, there isn’t anything wrong with the choppers. No. The wrong lies in the bribes extracted to place the order. Touting blacklisting as a proof of innocence is a red herring meant to put a veil over bribe-taking.

What is no less puzzling is that the Italian court -- equivalent to an Indian High Court -- actually hinted at wrong-doing by Sonia Gandhi. In its 225-page order it alluded to her incriminating role -- the `driving force’ in handpicking AW -- and, of course, former air chief SP Tyagi and his crooked cousins. This is rather unusual. To rap foreign nationals in a structured judicial process, especially without making them party to the proceedings, is not normal.

Also, could it be that the Italians were venting ire at the continuing travails of the two marines who had killed two fishermen off the Kerala coast back in 2012? The unconditional release of the marines is now a cause celebré with Italians. They might wonder what use was our own Signora Sonia, the boss of the UPA, if she could not free our young marines. Relations between Italy and India have so soured that Italy is now invariably arrayed against India in all multilateral forums. A million-dollar question is whether the Indo-Italian ties will improve now that the Milan court has pointed the needle of suspicion towards Signora Sonia in the bribery scam.

While still on the chopper scam, the Milan court order may have created a piquant situation for the Comptroller and Auditor General of India, Shashi Kant Sharma. Appointed by the UPA, Sharma was Director General (Acquisition), Defence Ministry, when the AW order was cleared. In the court judgment his name figures in the budget sheet which lists the bribes to be paid to each individual. 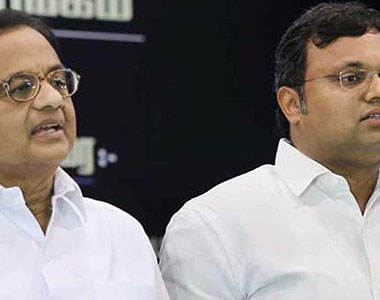 Chartered accountant by profession, S Gurumurthy became a household name in the 1980s following his well-documented exposé of one of India’s largest industrial conglomerates. Writing then for the unified Indian Express group, his forensic examination of the formative years of the industrial group had so angered some people that they attacked the newspaper’s legendary owner, Ramnath Goenka. Among them was one Kumar Ketkar, who at the time was working for a financial paper. Maybe that explains his longevity as an editor. Instead of feeling outraged at the skullduggery of the founders of the industrial house, its apologists abused RNG, as the mercurial newspaper magnate was called.

But that is not why we mention Gurumurthy, or simply Guru to his friends. It is to commend his excellent exposé on the financial skullduggery of P Chidambaram’s son, Karti. In a series of reports this past week in a Southern chain of papers, Guru has unmasked Chidambaram, lifting the veil on the money-making operations of his son when he was a key figure in the UPA Government. Karti parked the illicit hordes in benami companies. But in order that the benamis didn’t diddle him, he took care to get them to will the entire assets to his daughter Aditi Nalini Chidambaram. Photocopies of four such wills executed in favour of Aditi, in which the executor is none other than Karti, accompanied tell-all reports. An extraordinary piece of investigation, which will leave even the lawyer in Chidambaram Sr. gasping for a convincing rebuttal. Hopefully, after this evidence of loot, there will be no more weekly sermons.

Meanwhile, the fact that Karti did not trust his benamis tells something of the times we live in. In more innocent times people did not feel the need for such insurance just in case their benamis got greedy. But when benamis began to claim ownership, turning their noses at real owners, legal safeguards became absolutely necessary. In fact, the sons of a former Delhi chief minister till very recently were reportedly trying to recover from their benami whatever little they could in the absence of legal proof. At dispute were vast assets in lands and buildings running into thousands of crores at today’s prices.

They say dog does not eat dog. It seems the rule does not apply to today’s editors. The following post on the website of The Tribune in response to a signed article by Editor-in-Chief Harish Khare last Friday bears out the decline and fall in editorial norms. One Desh Bandu Chopra writes, ‘Wonder if HK Dua could have ever written a piece like that. He was busy pleasing Manmohan Singh, writing front-page editorials praising Chandrayan story. He was rewarded with a seat in Rajya Sabha. Going great guns, Mr Khare. Hope you keep it up….’ It is bad form to show dislike of your predecessor in this unseemly manner. Not done.

Virendra Kapoor is a Delhi-based journalist. The opinions expressed in this article may not reflect the views of Asianet Newsable and Asianet Newsable does not assume any responsibility or liability for the same.