Is the SC view on Jallikattu an indication of its mind on Sabarimala? 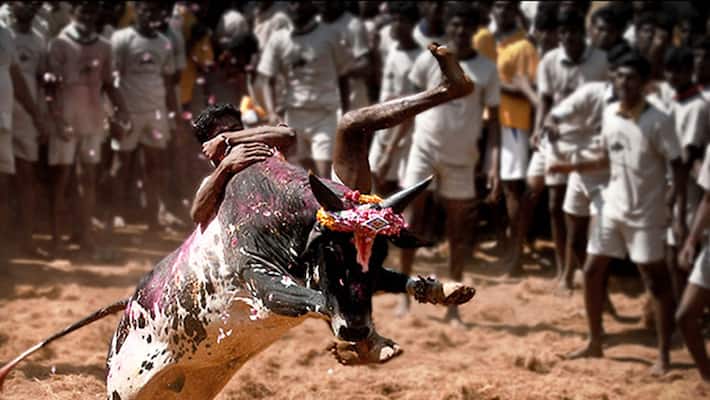 What was heard in the Supreme Court as an argument by counsel for those who want the ban on Jallikattu lifted, has been heard on the streets of Madurai in southern Tamil Nadu for a while now. It acquired high decibel levels in January this year, when sufficient pressure was mounted on political parties to make the bull-taming sport happen around Pongal festival.

Locals in Jallikattu territory have for long asked, defiantly how a 66-year-old institution (read Supreme court of India, that was established in 1950) can rule over a 450-year-old traditional sport. Illogical as it may sound, the argument finds ready takers in this emotional-about-Jallikattu patch of India. But since the apex court is the final authority, the pro-Jallikattu group argued in favour of continuing with the traditional sport, only for the judges to tear it to shreds.

“Just because the sport is centuries-old, it can't be said that it is legal or permissible under law. Since centuries, children below the age of 12 years were married. Does that mean that child marriage is legal?'' the bench observed.

The comments give a clear peek into the mind of the two-judge bench that it is highly unlikely to overturn the ban on Jallikattu that was imposed in 2014. But let us not forget that the Supreme court is also hearing another petition, which too relies heavily on the word `tradition'. The petition challenges the decision to disallow women of a particular age group into the Sabarimala shrine.

Those arguing for status quo have been going back to times immemorial, the bachelor status of Lord Ayyappa, the reigning deity at Sabarimala and how menstruating women between the age of 10 and 50, therefore, cannot be allowed into the temple.

What is interesting to note is that Justice Dipak Misra is heading both the benches - hearing the Jallikattu and Sabarimala cases. A former Chief Justice of Delhi and Patna High courts, Justice Misra is in line to become the Chief Justice of India in 2017. In these two cases, the judge has through his incisive observations, on many occasions, given the court and the country, a sense of where he could possibly stand.

In April, while hearing the Sabarimala case, the bench said, "What right does the temple have to forbid women from entering any part of the temple? Please argue on the bedrock of the Constitution. Every argument has to meet the test of constitutionality.''

This displayed an intolerance with arguments that based themselves on centuries of tradition, just like in the case of Jallikattu on Tuesday.

"Can you deny a woman her right to climb Mt Everest,'' asked the bench, arguing that "anyone can worship a God or Goddess''. In observations that would be interpreted as questioning the very basis of Hindu form of worship, the bench said, "You have structured God into an idol although he is omnipresent. Can you say don't come because you are a woman? The ground in this case, is that gender justice is in danger.''

Also Read: Ban on entry to Sabarimala is a violation of Fundamental Rights

The petition has maintained that the religious denomination - the Travancore Devaswom Board in this case, can restrict entry only into the sanctum sanctorum and not into the temple per se.

Those pushing for the doors of the temple to be opened have got support now from the new LDF government, which has overturned its predecessor UDF government's decision to maintain status quo.

The Jallikattu case is up for its final hearing on August 30 and a judgement in the case could set the tone for the verdict in the Sabarimala case. Justice Dipak Misra is the man to look out for.