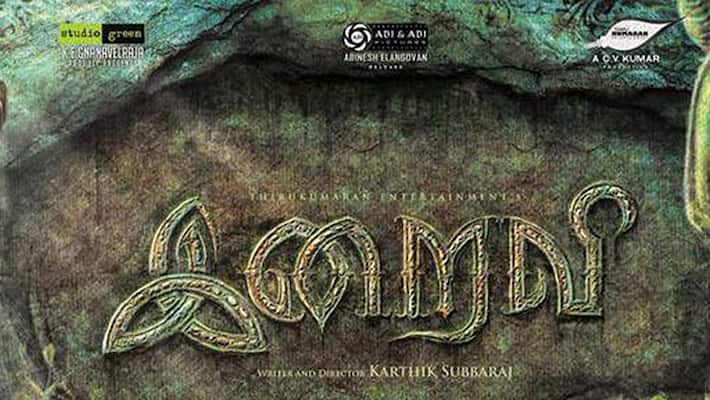 I watched 'Iraivi' (Goddess) on the very day of its release Friday last because director Karthik Subbaraj's previous effort 'Jigarthanda' was a very differently made commercial film.

In a nutshell, I felt like I was thrown into a septic tank with my hands and feet firmly tied.

We could quietly pass this by if it merely were a bad film.  'Iraivi' is a testament to Tamil Nadu's cultural debasement.

Director-turned-actor SJ Surya (don't ask me his name in the film; my mind went so numb it didn't register) plays a film director. For some reason, the theatrical release of his new film--a great, great Bergman-beating, Kurosawa-trumping piece of artistic work, we are repeatedly told--is stuck.

More from the author: Kammattipaadam: Welcome to Dalit Noir. And It is brilliant

His spirits broken, Surya hits the bottle big time. And that is an understatement. He drinks from six in the evening to six in the morning. There is not a moment when he doesn't drink.

Surya's brother, played by Bobby Simha and Vijay Sethupathy, join him, and they all drink some more.  The three smoke so much that they could, by themselves, deplete the whole of the ozone layer.

What they speak makes absolutely no sense. Surya has a six-or-seven-year-old daughter. When she leaves for school, he staggers home from the bar. 'If this continues, I'll divorce you soon,' says his wife in mild disapproval of his conduct.

But like the Nalayani of our epic, she understands her husband's pain that has led him to alcohol. I fully expected the wife, Nalayani-like, to carry Surya in a basket to the brothel. But no. Surya was a too good a man. He only drinks because his 'world best' film isn't being allowed out of the tin.

Friend Vijay Sethupathy has a love interest. But the girl, who is the harbourer of 'revolutionary' views doesn't care a damn about love, and matters of the heart.  That sex alone forms the basis of man-woman relationship, is her unshakeable belief. However, for all her radicalism on the matter, she shies away from using the S-word.  Throughout the film, refers to it as the 'three-letter-word'.

Vijay Sethupathy pesters the 'radical chick' to get married to him. She keeps chanting the 'three-letter' mantra.

Exasperated, he asks his parents to find a girl for him. Is this the 1960s, I wonder. Haven't they thought about this called 'live-in' relationships?

But I forget, the act of thinking, or thought, has nothing to do do with this film.

Vijay Sethupathy eventually gets married to Anjali.  He lights a cigarette during their 'first night'. The girl asks, 'Oh you smoke.' 'Don't ask such questions because I haven't married you out of choice,' he says, and going to sleep (alone). Are these people from Planet Nova?

Meantime, the great director Surya's wife and father approach the producer of the greatest film to resolve the release tangle. The producer asks for Rs 6 crore to get the movie out.

The whole family--father, brothers, friend--huddles together in a hospital  (they are there because Surya's mother has been in coma for a very long time) to arrive at a solution. Just as he shouts in a drunken rage throughout the film, Surya  does that in the hospital as well. A disapproving nurse comes. Surya shouts after she leaves. Then she comes and goes again. Surya shouts again. This is getting tedious, right?

Also Read: 5 reasons Housefull 3 is not worth your time or money

I wanted to get the hell out of the hall in 10 minutes of the film's start. Sadly, I had the last seat, and exiting would mean stepping on the toes of 15 people in darkness. Therefore, I waited for the intermission.

To get the Rs 6-crore, Bobby Simha's grand plan is to steal an antique statue of a goddess. Surya initially disapproves. Bobby says, he's done it in the past. 'No risk,' he adds sunnily.

At the end of the discussion, even the Surya's father (played by Radha Ravi) gives the green light for the planned heist. As justification, he argues, 'to get one work of art out in the midst of people, stealing another is no crime.'  What a profound philosophy!

They talk of stealing a national treasure as if it were akin to buying a packet of cigarettes.

The problem with 'Iraivi' is not that it's a bad film, but that it advances, and glorifies ideas, that are downright dangerous for the society.

The problem with 'Iraivi' is not that it's a bad film, but that it advances, and glorifies ideas, that are downright dangerous for the society.

I'm pretty certain youngsters who watch the film would think it's okay to steal if you are in a tight spot; it's okay to turn an alcoholic if there's trouble at work. Like displays of casual racism in our films, this is propogation of casual immorality.

Upon closer examination, what he probably means is that the character of Anjali (who marries Sethupathy) is modelled on Damayanti, or Nalayani.

Anjali gets pregnant. Sethupathy seeks out his former lover. 'Hey, what is it the bottom line,' he asks. The girl continues to bang on about the 'three-letter' word but asks him if he hasn't touched his wife.

At that precise moment, a young man walks into her house. 'Who's that,' queries Sethupathy. 'Take a guess,' says the girl. Our friend storms out. Just then, the new entrant hands a laptop to her and says,'I have made it all right, sister,". He repeats the word 'sister' twice.

Then comes the scene that according to the director is the 'apogee' of cinematic depiction of feminism. Looking at Sethupathy from the window, the girl who believed only in the 'three-letter'word, sobs uncontrollably.

Imagine a lunatic asylum whose inmates have been fed six pegs of cheap brandy.  The result would resemble 'Iraivi'.